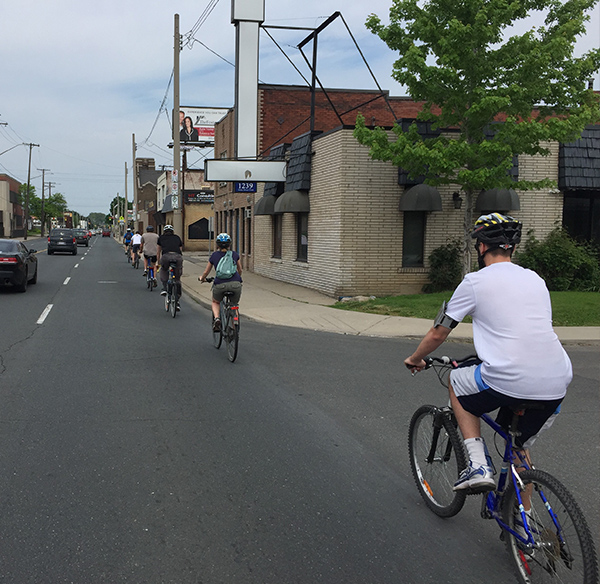 On May 29th, Matt Johnston participated in the first #PEDRide of 2016. PEDRides are one part of a series of events intended to bring together citizens, business leaders and city builders to share ideas and insights about Hamilton’s future growth and development. The series, led by Mr. Jason Thorne, MCIP, RPP, General Manager of the City of Hamilton Planning & Economic Development Department also includes PEDTalks, PEDBlog and PED Conversation Couch. For more information on future PED Events, please click here.

For the first PEDRide of 2016, Mr. Trevor Horzelenberg, MCIP, RPP, CET, Senior Project Manager – Light Rail Transit (LRT) Coordination, led participates on an 11 kilometre tour of the future LRT Route. Along the way, Mr. Horzelenberg provided insight into the design, development opportunities and challenges at each station stop. Tour participants learned how the intricacies and unique qualities of the various stretches along the corridor each need their own individual design considerations to better serve their surroundings. For more on Hamilton’s future LRT, please click here.

The PEDRide also provided Matt a new appreciation for cyclists in the City. Matt utilized portions of the City’s trail networks, streets and dedicated bike lanes to travel from his Ancaster home to meet other participants at the Queenston Traffic Circle, the start of the tour. After rubbing elbows with vehicular traffic on one side and dogging sewer grates and potholes on the other; Matt quickly realized, the struggle is real. A bicycle malfunction saw cyclists coming together to help one another out, further emphasizing the point that cycling in the City requires one to deal with the unpredictable. Luckily, Matt was able to finish the tour on a Sobi Bike thanks to Trevor’s Sobi membership while Jason’s U-lock kept his bike safe at Tim Hortons Field until it was picked up later in the day and taken in to the shop. Thanks again Gentlemen.

All in all, this well-organized PEDRide of Hamilton’s future LRT route proved to be very insightful and we at UrbanSolutions encourage you to participate in future PED events. Well done @JasonThorne_RPP and @thorzele.